If you’re a musician or own some kind of music that may be streamed/played via internet radio, here’s something that might be of interest.
Found @ theunderstatement.com
David Lowery’s “My Song Got Played On Pandora 1 Million Times and All I Got Was $16.89” article has been picked up over and over and over, including by very respectable folks, often without comment.

This has left many readers with two impressions:

Music royalties are complex, but both of these are patently untrue.

WHAT DID PANDORA PAY & WHAT DID THE BAND GET?

After the administrator SoundExchange takes its fee of 5.3%, the performance royalty is split, with 50% going to the recording owner (i.e. record company), 45% to the band/performer, and 5% to any session/backup musicians. So the band in this case received $543.30 for their performance.

Conclusion. By this math:

Whatever one thinks of the fairness of those numbers, they’re all clearly far larger than $16.89. 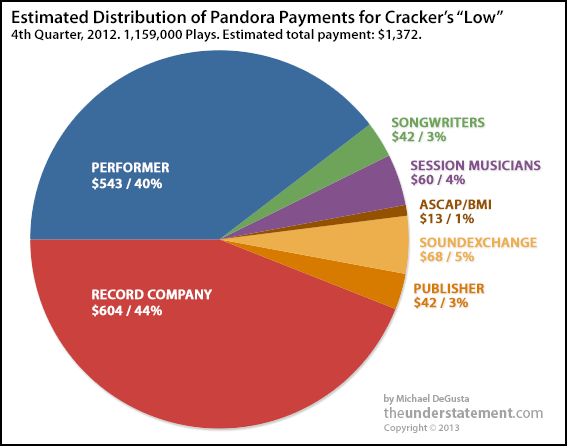 HOW DOES THIS COMPARE TO SATELLITE & TERRESTRIAL RADIO?

The main issue here is that Lowery cites only dollar amounts for comparison:

This is quite simple: those sources paid him a lot more primarily because a lot more people heard his song via those sources.3 For example, AM/FM paid him $1,373.78 for 18,797 spins. That’s 7.3 cents per spin. If only 10,000 listeners heard each spin, terrestrial radio is in fact paying just half the songwriter fee Pandora paid him per listener. And of course it’s likely to have been far more than 10,000 – even the intentionally miniscule South Dakota radio station Pandora just bought manages to average 18,000 listeners.

Even more importantly, FM/AM paid him NOTHING for the performance of the song. Unlike most industrialized nations, terrestrial radio stations in the US have never paid performers anything.4 It’s hard to believe, but true: they can play John Coltrane’s version of “My Favorite Things” for decades and never pay him or his estate a single cent.

AM/FM radio royalty payments are contractually capped at just 1.5% of revenues, meaning a measly 0.7% of radio revenues go to the actual songwriters – and 0% to performers.6 Pandora would indeed love to get down to those much lower rates that competitors like iHeartRadio already get to pay because they’re owned by a terrestrial radio conglomerate. Strongly implying that Pandora’s royalty rates are already far worse than AM/FM seems just plain misguided.

None of this means Pandora ought to pay less in royalties. On the contrary, it seems quite likely that others should be paying more. And perhaps the non-artists involved in the transaction shouldn’t be taking 53% of the total for their services. But attacking Pandora with intentionally misleading statistics just undermines the credibility of the argument.